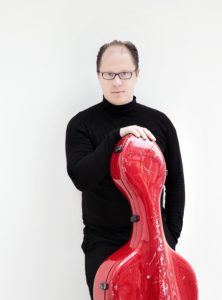 The Salzburg-based Italian cellist Giovanni Gnocchi has established himself as one of the most interesting personality of his generation, with an international activity both as a soloist and refined chamber player.
He made his debut as soloist at the Hong Kong Arts Festival in a concert together with Yo-Yo Ma, who said: “a wonderfully talended cellist, who will make a valuable contribution to music wherever he goes”.

He performed as a soloist under the baton of some of the most prestigious conductors of the international scene, like Gustavo Dudamel, Christopher Hogwood, Carlo Rizzi, Pavle Despalj, Michele Spotti, Daniele Agiman, Enrico Bronzi, Daniele Giorgi, Daniel Cohen, at the Hong Kong Arts Festival, Wiener Konzerthaus, Mozart-Woche in the Großer Saal of Mozarteum in Salzburg, Essen Philharmonie, Kurhaus Wiesbaden, Liederhalle Stuttgart, Rosengarten Mannheim and many more.

In these years he has been playing as a soloist orchestras like the Zagreb Philharmonic Orchestra, Camerata Salzburg, Orchestra della Toscana of Florence, Filarmonica of Teatro La Fenice in Venezia, performing the most important cello concertos, including Dvořák, Schumann, Tchaikovsky’s Rococo Variations, Boccherini Concertos, both Haydn’s, Beethoven Triple, Brahms Double, in Salzburg and in England, and also Friedrich Gulda’s Concerto for cello and Big Band. Very recently he made his debut as soloist at the prestigious Beethovenfest of Bonn with Orchestra da Camera di Mantova, being immediately invited again by the orchestra for further soloist appearances.

The next season includes his debut with Sinfonia Concertante op. 125 by Prokofiev, Schumann Concerto op. 129 with Daniele Agiman and Orchestra Rossini of Pesaro, debut at Festival Stradivari of Cremona with OTOOrchestra del Teatro Olimpico of Vicenza conducted by Alexander Lonquich, at Amici della Musica di Firenze in the role of soloist and conductor of OGI-Orchestra Giovanile Italiana, concerts in trio with Marco Rizzi and Roberto Cominati and some recitals in duo with Andrea Lucchesini.

He has been playing in duo and trio with Alexander Lonquich and Ilya Gringolts, he made his debut at the Lucerne Festival in trio with Olli Mustonen and Alessandro Carbonare, played in chamber music tours in Italy with Leonidas Kavakos and in Holland with Liza Ferschtman, played in Japan in the inauguration of the new Ark-Nova Concert Hall,, soloist at Teatro Regio of Parma with Mario Brunello, and he’s been invited to Ljubljana Cello Fest in Slovenia, Ilumina Festival in Brazil, Järna Music Festival in Sweden, Delft Music Festival in Holland, KotorArt Festival in Montenegro, Festival Musikdorf Ernen in Switzerland.

Giovanni has been Solo-Cellist of Camerata Salzburg for 8 years, Guest Principal Cellist in the Royal Philharmonic Orchestra of London with Daniele Gatti, guest principal in the Münchner Philharmoniker, Mahler Chamber Orchestra with Daniel Harding, Philharmonia Orchestra of London, Orchestra Mozart with Claudio Abbado and co-principal cellist in the London Symphony with Valery Gergiev, Since 2008 he has been member of the Lucerne Festival Orchestra, playing with Claudio Abbado, Bernard Haitink and Andris Nelsons.