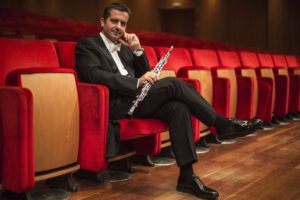 Francesco Di Rosa has been the oboe soloist of the Orchestra dell’Accademia Nazionale di Santa Cecilia since 2008. He was born in Montegranaro, Italy in 1967, and studied oboe with Luciano Franca and Maurice Bourgue. From 1994 to 2008, he was the oboe soloist of the Teatro alla Scala directed by Riccardo Muti and Daniel Barenboim. Di Rosa won the second prize for in Zurich “Jugendmusik Wettbewerb” in 1988 and six other competitions.

He has been featured as a soloist under the direction of maestros Riccardo Muti, Myung Wun Chung, Ton Koopman, Antonio Pappano, and has performed in some of the world’s finest concert venues, including Musikverein in Vienna, Teatro alla Scala, Musikhalle in Hambourg, Tonhalle in Zurich, the auditorium Parco della Musica in Rome, Teatro Coliseo in Buenos Aires, and Bunka Kaikan in Tokyo.

He has recorded a vast collection of oboe repertoire on the EMI, Thymallus, Bongiovanni, Preiser Records, Musicom, Real Sound, Tactus, Dad Records, Aulia, and Brilliant labels, as well as for the magazine Amadeus. Di Rosa was the vice president of the Scala Philharmonic and currently serves as the art director of “Amici della Musica di Montegranaro.”  He is also a founding member of “Musicians for Human Rights” of the Orchestra of human rights.

He is on faculty at the Santa Cecilia Academy in Rome and plays on a Buffet Crampon Oboe “Virtuose.”