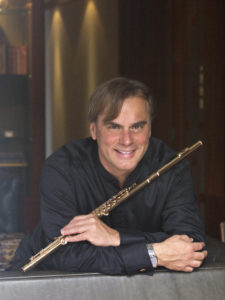 Andrea Griminelli’s sensitive interpretations and astonishing technique have earned accolades and awards from every corner of the musical world –including the Grammy, the Prix de Paris and an Italian Knighthood.

Legendary flutist Sir James Galway described him as “the greatest flute player who has come to the forefront of the musical scene for many years”.

Over a 34-year career as a soloist, Griminelli has performed at La Scala, Carnegie Hall and Suntory Hall among many others in Europe, Asia and the Americas. His performances with leading conductors have included Georges Pretre, Carl-Maria Giulini, Zubin Mehta, Sir Roger Norrington, Emmanuel Krivine, Yuri Bashmet, Sir Richard Bonynge, Jean-Pierre Rampal, Gennady Rozhdestvensky, James Levine, and Jerzy Semkov among others.

In 1984, at 25, he was invited by Luciano Pavarotti to perform in the now famous concert at New York’s Madison Square Garden. This marked the start of a collaboration between the two artists that spanned 200 concerts including performances at London’s Hyde Park, New York’s Central Park, the Eiffel Tower in Paris and Red Square, Moscow.

A champion of new work, he has given the world premieres of compositions for flute and orchestra by many composers including Carlo Boccadoro, Fabrizio Festa, Ennio Morricone and Shigeaki Saegusa.

Griminelli began playing the flute at the age of eleven. During his studies with Jean-Pierre Rampal at the Paris Conservatory, he won music competitions in Stresa and Alessandria, Italy. He was twice awarded the prestigious Prix de Paris.

A prolific recording artist, he has been featured as soloist on more than 30 discs including recordings with the English Chamber Orchestra conducted by Jean-Pierre Rampal and Camerata Academica Salzburg led by Sir Roger Norrington.

His work on behalf of charitable causes has led to frequent collaborations with artists from popular culture including Sir Elton John, James Taylor, Sting, Branford Marsalis and Ian Anderson of Jethro Tull.